Are people being bought out for a few extra crumbs by the Government coalition in this week’s budget?  I’m fairly confident that most are not that naive or superficial. Polls are not very accurate, but at least they offer a rough indication of trends, and in one poll, 44% said they were unhappy with the budget, while 41% said they were “happy”.  The rest had “no opinion”.  However here are two comments from social media which left me astounded by their naivety:

I’m chuffed with the extra tax credit I’ll get. It’s allowing me to earn a little bit more before I get taxed. I started my business thanks to the social welfare, and S—— wouldn’t be where it is without it. I’ve a long way to go, but I’m satisfied for now. More arts funding would’ve been great, though.‪

Is the above comment an indication that the government’s use of this budget for electioneering purposes before a general election has worked in at least some cases?  Perhaps that young commenter does not realise that all of their annual €550 “increase” will be wiped out in a couple of months should their landlord increase their rent by a couple of hundred euro; the Government has still not introduced rent controls and seems reluctant to.  It would also be wiped out by an increase in the water tax to €500 – if that particular commenter chooses to pay it.  Price increases may also null it; such is the nature of capitalism.  I wonder if the commenter is insulated from the harshness of the current economic environment in other ways, that they may feel so confident in making such a comment?  – I’m quite certain it does not reflect the broad opinion of the working class generally.

This comment conveys the sense that the commenter in question may not realise that they have not necessarily been “given” €264.  That sum actually represents just some of the money that was taken from them a workers years ago through austerity. Concealing this point is the media’s portrayal of the budget as 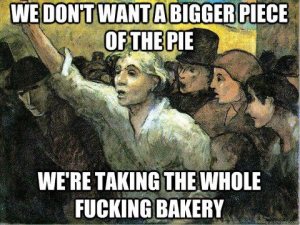 a “giveaway budget” despite the fact that it offers little, if anything, to people who earn average or below-average wages.  Graduates, students and young unemployed people have been conspicuously ignored by it.  It has served to increase the inequality gap even further too, and the modest increases that people have received generally should be viewed in that context.  Those on low incomes will continue to suffer, while those on slightly higher incomes will be pushed further down, their temporary “benefits” received from this budget cancelled out.
James Connolly’s We Only Want The Earth came to mind:

Some men, faint-hearted, ever seek
Our programme to retouch,
And will insist, whene’er they speak
That we demand too much.
’Tis passing strange, yet I declare
Such statements give me mirth,
For our demands most moderate are,
We only want the earth.

“Be moderate,” the trimmers cry,
Who dread the tyrants’ thunder.
“You ask too much and people By
From you aghast in wonder.”
’Tis passing strange, for I declare
Such statements give me mirth,
For our demands most moderate are,
We only want the earth.

Our masters all a godly crew,
Whose hearts throb for the poor,
Their sympathies assure us, too,
If our demands were fewer.
Most generous souls! But please observe,
What they enjoy from birth
Is all we ever had the nerve
To ask, that is, the earth.

The “labour fakir” full of guile,
Base doctrine ever preaches,
And whilst he bleeds the rank and file
Tame moderation teaches.
Yet, in despite, we’ll see the day
When, with sword in its girth,
Labour shall march in war array
To realize its own, the earth.

For labour long, with sighs and tears,
To its oppressors knelt.
But never yet, to aught save fears,
Did the heart of tyrant melt.
We need not kneel, our cause no dearth
Of loyal soldiers’ needs
And our victorious rallying cry
Shall be we want the earth!